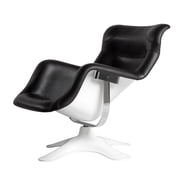 Yrjö Kukkapuro was born 1933 in Viipuri and is an international accepted and successful Finnish designer. After his studies as an interior designer, Yrjö Kukkapuro founded his own design studio in 1959. Since then, the awarded designer works as a teacher, professor and rector.

His most famous design is he Karuselli Lounge Chair, which huddles itself perfectly against the body with his curved form. Material, production process and the end result should form a logical and user friendly unit for designer Yrjö Kukkapuro.

His designs can be found in the permanent collection of different museums, like the Museum of Modern Art (MoMA) in New York, the Victoria & Albert in London, such as the Vitra Design Museum in Weil on the Rhine.