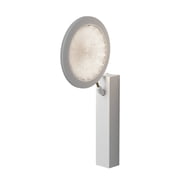 Consuline - that’s Francesco Iannone and Serena of Tellini, two architects from Italy. The two met while studying architecture in Milan in 1975, which led to the founding of the light studio Consuline. Since then, the two Italians with a team of designers design exceptional lighting for national and international manufacturers, such as Artemide, Luceplan, Osram.

Their greatest achievements are the lighting of the Formula is 1 racetrack in Shanghai and the planning of lighting at the Olympic Games in Beijing in 2008. Both are also the co-founders of the International Association of Lighting Designers.