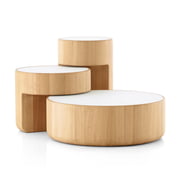 Dan Yeffet was born in Israel in 1971 and studied industrial design at the Bezalel Academy School of Art and Design in Jerusalem. After graduating there, he moved to the Netherlands, where he devoted himself to the study of industrial and product design. He then founded his first studio in Amsterdam, before moving to Paris in 2005 to work and live there until today.
Dan's work combines traditional craftsmanship with modern technology, focusing on objects such as furniture, lamps, glass sculptures and art objects. His designs can be described as innovative, simple but with a strong character.
When Dan was asked to define his own work, he replied:
Definitions set us boundaries. I would describe myself as an explorer and adventurer. The best thing about design is that anything is possible - dreams can be realized and raw material becomes something personal. Dan Yeffet

His designs have since been exhibited in various museums and have been awarded numerous prizes. In 2012, he won the Grand Czech Design Award as Designer of the Year and the ELLE Decor international Design Award.