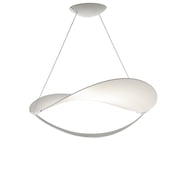 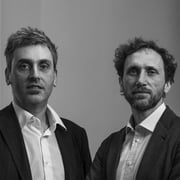 Eugenio Gargioni graduated from the Faculty of Architecture in Genoa in 2000 with a degree in Industrial Design. After several years of professional experience, together with architect Paola Traversa, he founded the Studio Euga Design in Milan, which was subsequently awarded the Red Dot Design Award and the iF Design Award and included in the ADI Design Index.

Guillaume Albouy graduated in mechanical engineering in Toulouse, followed by a master's degree in industrial design. Based on his double education, he initially worked as a designer for the bicycle industry. He then moved to Milan, where he founded Studio Ghiom, which focused on sporting goods, consumer goods, graphic design and brand identity. Guillaume Albouy has already won the Étoile de l'Observeur du Design and the iF Design Award.

The meeting of the two creative studios resulted in Plena, their first joint design for Foscarini.