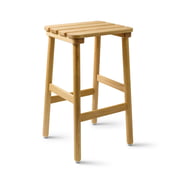 Fritz Frenkler graduated with a degree in industrial design from the academy of fine arts Braunschweig. Fritz Frenkler worked then for Frogdesign Germany and USA. In 1986, he set up and led Frogdesign Asia. From 1992 to 1997 he held the position of general manager of Wiege Wilkhahn Entwicklungsgesellschaft, before becoming head of design at Deutsche Bahn ag and general manager of Deutsche Bahn Medien GmbH.

Fritz Frenkler and Anette Ponholzer founded the design office f/p design in Frankfurt am Main in 2000. There is also an international office in Japan. f/p design Germany works in a team of eight product designers. Furthermore the design office works with two employees in Tokyo and Kyoto.

Since the foundation of the company, f/p design received 38 design awards, among them the G-Mark in gold, the if product design award in golf, silver and best of category as well as the DDC Gold Design Award.

Besides his work as counsellor of f/p design, Fritz Frenkler is a member of the management of the if industrial forum design in Hannover, chairman of the if product design award jury, member of the DDC /German Design Club) and one of the founders of the Universal Design e.V.