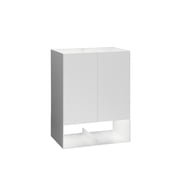 Mark Holmes was born in 1970 in Northern England and started his creative career with a degree in painting at the Slade Schoold of Art in London in 1994. He founded the group of artists “The Lane” together with Sebastian Wrong in 2003, which was responsible for the interior design of the Stella McCartney outlet stores in London, Paris, and Korea, among others.

Holmes concentrates on different design processes since 2003: From design through manufacturing up to distribution, he is involved in all processes at "The Lane". Holmes even experimented with different materials along the years. Meanwhile, Holmes became famous for a reduced aesthetics, which is reflected for example in lighting designs for e15.