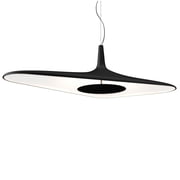 Odile Decq is a French architect and designer with her own design studio in Paris. After she graduated in architecture in 1978, Decq ran her own businesses for some years until, in 1985, she decided to cooperate with the designer Benoît Cornette. Together, they ran the Studio ODBC, which is today known under the name Odile Decq Studio.

Over the years, Decq has received numerous awards, among others, she was awarded by the jury of the architecture Biennale in Venice and got the award of the Royal Institute of British Architects. In addition, she is a honorary doctor of the Laval University in Quebec.